Auto-suggest helps you quickly narrow down your search results by suggesting possible matches as you type.
Showing results for
Show  only  | Search instead for
Do you mean
Turn on suggestions

Auto-suggest helps you quickly narrow down your search results by suggesting possible matches as you type.
Showing results for
Show  only  | Search instead for
Do you mean
Reply
Topic Options

We were having a chat about this earlier today at 48 towers, and I decided to put together a list of things that wind me up – I don’t have too many ‘off’ days in general, but some things grind my gears, if you get what I mean? Anyhoo, I’ve put a list below of some of the things that came to mind first...

1.)    Cyclists holding up lanes of traffic – Men in lycra shorts and with shaved legs!

4.)    People who take too long at bank machines

7.)    Nicholas Cage – get a look at the man, in all his mental glory; www.youtube.com/watch?v=xP1-oquwoL8‎

There you go - I've given it wings and opened the window... anything you would add to it, then feel free and go ahead...

Remember – a friendship is a lot like peeing yourself – a lot of people may see it, but only you really know how warm it feels…  ~ Kev @ the care crew

People who think the bus is their phone booth(!!)

Oh and the folks who still haven't figured out that the standard iphone earplugs are the worst. The people around you hear more of your (mostly embarrassing) music than you do :-/

People who in an 80kmh zone go about 50Kmh the whole way, then when you get to a 50Kmh zone, they speed off!

-Tractors on country roads(and anywhere else for that matter)

-All pop music over the last 5 years

-Badly thought out adverts on TV(really gets me)

-People who are walking in front of you and decide to stop in their tracks, for no apparent reason.

-Shops who have ran out of Amber Leaf

- People with blaring headphones, not because of the noise, because they will be going deaf in a few years ( I'm a sound engineer so ear care is precious)

I'm sure there is more. Pheewww I feel a lot lighter now

I'm a cyclist who has to cycle on country roads and let me tell you, the drivers are so mean >_<

I try so hard to keep in the side, but the amount of times a car has whizzed past so close i almost fall off my bike into the bushes! Cyclist actually have the same right as a car on a road too, so it's not nice almost getting killed everytime I cycle!

-People who sneeze into the air, no tissue or anything! Makes me feel so germy

-In my house, my brother has the habit of finishing the carton of milk or juice and leaving it back in the fridge

That sort of carry on makes my blood boil! Nothing worse than making a fresh cup of tea and you go for the milk and its empty. It's quite heartbreaking sometimes

-Abercrombie Yoga Pants.I don't care if they are comfortable, I don't want to see what you're making me see.

-Dogs barking at night. I have two dogs, none of them do this. Why?  It's called training.

-When you're on your phone in bed at night and suddenly a moth plummets towards the screen. I can NEVER get used to this, those flappy dust winged creatures of evil

I'm not sure if this venting is making me feel better or more angry.

A bit of both.

And Kev, Nicholas Cage's face makes me laugh so much. I tried to watch Kick-Ass the other day and everytime they showed his face I just started laughing.

Wanna know something? If you google "Nicholas Cage's Face On Things" it is the most hilarious thing on the internet. Here let me show you And last but not least

I don't know what your problem is, guys, I love his face

And on that note: 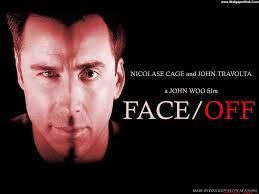 Well I thought Nicholas Cage is not sooo bad, I mean he gets a hell of a lot of stink! I guess he is the Nickelback of Hollywood .Obviously I don't think he should be as well known as he is, and his face is quite.. laughable, some emotions are just tragic when he does them XD

But besides the point, What grinds my gears is similar to you guys here,

1- Hollister wearing in general, where people think that it's a fashion. (It's not)

2- As I cycle a lot, many cars think that I have sufficient space and should actually stop for them even when they overtake( And so they sing me the song of their people in the form of a honk..), thankfully the French aren't so ignorant about cyclists..

3-When you go to a store for an offer which is publicised and they tell you it doesn't exist, you persist and finally after ages of waiting for other staff they finally admit to you you are indeed correct.

4-Red tape, so much goddamn red tape. Where if you don't have one thing you can't get the other because you don't have another thing,and it works in a vicious cycle. There is a limit to bureaucracy before it is just a pain.

5-Pedestrians..They are like rabbits on the road, they jump in front of you when you try to swerve to avoid them.

This Nicolas Cage thing never gets old, did you see this remake of the latest Myley Cyrus video?

So, there I was - just out for a walk, stretching my legs in Portlaoise (as you do) when I stumbled across a large crowd of people having a right old knees-up in a field! I heard somebody mention something about a Picnic, but I cast that to the back of my mind and slodiered on through the crumpled heaps of bodies scattered all around as far as the eye could see, and moved on, as if drawn towards what can only be described as an ungodly sound emanating from a half-built house on the hill. Then, all of a sudden - I seen him there - taunting me, with his vaccuous gaze, sneering at me from afar! "Is there nowhere that's safe from this man?!" I shouted at the Heavens, waving my fist in disgust at God's cruel joke. For a second, I tried to convince myself that it was something to do with the various cocktails I had taken on the course of my walk, but on rubbing my eyes, I found that his demonic vision still confronted me. There is no escape... 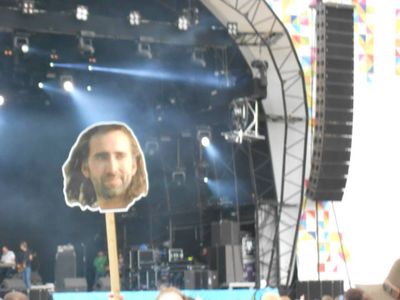